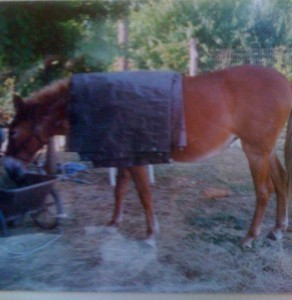 I once assumed well trained and gentle meant the same thing. That was multiple horse injuries ago. Now I understand there is a big difference.

My mule, Tess, is a great example of the difference between well trained and gentle. I took Tess to a Buck Brannaman clinic when she was 17 years old. This clinic was an eye opener for me. I had trained Tess myself and we had done all kinds of cool things together. Tess could walk, trot, canter on cue, get her leads, back and side pass. I showed her successfully in local hunter shows and we had been trail riding in the mountains of Colorado.

I was very pleased with Tess but noticed that she would still occasionally buck me off or run me over when I was leading her. I always made excuses for this behavior because I had no idea how to stop it. The tendency for Tess to buck or bolt never seemed to have any consistent pattern, at least not that I was able to notice. Instead of getting better as she got older, Tess became more unpredictable so I sought out trainer, Linda Hoover to help me understand what was happening.

Linda pointed out how tense Tess was in her body. Tense, really? I had not noticed this. Thus began a huge learning curve for me concerning how horses can carry a mental brace in their bodies and how this brace affects their behavior. Linda suggested I take Tess to the Buck Brannaman clinic and my education continued.

I was signed up for the horsemanship class with Buck but he did a colt starting class in the morning. He had the people doing all the groundwork that Linda had taught me but he also had them handling the colts with lots of energy. I had always been real quite when working around Tess but Buck had people slapping the colts on the saddle and banging the stirrups gently against the colts sides. People were supposed to pull on the colt’s tails and swing ropes around their legs.

Buck explained that colts were an open book on that first saddling and they did not know what they were supposed to do or be afraid of. Everything was new to them so he said the more you could present in a good way the better. This was fascinating to me and so different from what little I knew about starting young horses.

As I was saddling Tess for her afternoon class I pulled one stirrup about 6 inches from her side and dropped it. I swear she jumped 2 feet in the air and came down all bothered. It was then that I realized that Buck was teaching the colts the proper way to respond to stimulation rather than simply reacting to it. By offering a wide amount of stimulation to the colts they were learning that they would not be hurt and they could relax and learn. I had never taken this step important training step with Tess.

I began to spend more time with Tess simple exposing her to new things. She learned about flags, ropes, tarps and big, scary plastic pool toys. Tess got gentler and gentler. I knew we had come a long way when one day I was riding through a tight spot and hung my stirrup on a cedar pole. When I realized the pole was stuck through the stirrup I expected a wreck when Tess panicked. But she didn’t panic. She stood still and asked me what I wanted her to do. We backed a few steps and I reached down and unhooked the stirrup.

A well trained horse(or mule) is a pleasure to ride and compete with but a gentle horse will keep you safe. Madalyn

2 thoughts on “Holistic Horsemanship: Is your horse well trained AND gentle?”