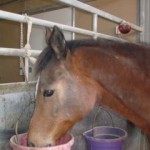 Bud, my food sensitivity patient, had a flare up of his horse ulcers this weekend but instead of being set back for a week of more he was eating again in less than an hour. What a miracle compared to a few months ago.

Bud has been such a challenging case and it was not until he began to shift out of his stressed, sympathetic state that he started to improve. It did not help that during the time Bud has struggled with his horse ulcers we have had an 18 month drought, the hottest summer and coldest winter for many years. Severe stress has been part of Bud’s life for almost 2 years.

As for treatment, ulcers are stubborn under the best of circumstances but in this case I had to focus on healing Bud’s gut and stopping his stress reaction. I gave Bud horse ulcer support products such as KLPP , UF , Succeed and aloe vera / slippery elm as needed and I alternated them so Bud would not develop sensitivities to them.

To address the stress issue I used an herbal product, Eleviv . This product is new and I have learned a lot about its power from watching how Bud responded. I started Bud on 12 eleviv a day during the worst of the cold winter and gradually decreased him to 4 a day as the weather improved. Several days ago after a brief spell of warm weather we had a cold front blow in with a fifty degree temperature drop and 40 mile an hour winds.

Bud’s horse ulcers flared up and he did not want to eat. I tried homeopathic remedies but got no response so I felt he was in the stressed state where his system could nor respond to remedies. Instead, to treat the ulcer flare up I gave 10cc of KLPP and 8cc of herbal Buck Mountain licorice. This did the trick and within an hour Bud was back eating and has not looked back. Before the course of Eleviv, it would have taken Bud a week or more to recover. Bud is one tough little horse and it is great to see him on a healing path. Madalyn

1 thought on “Holistic Horse Health: Bud recovers quickly from a flare up of horse ulcers”