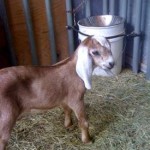 The baby goaties are here and not without some drama. First, Sally had only one kid and he was huge. I bred her when she was still being milked so I guess that is why she had only one. She was pretty sore and cramping several hours after delivery so I decided to palpate her to make sure she did not have another kid inside but she was fine.

Sissy, Sally’s daughter, made up by having triplets. This was her first time and she had a terrible birth. One of the kids was crossways in the birth canal so I had to go inside and straighten it. Then the other 2 came easily. Sissy was quite a trooper as we got all the kids up and nursing.

All went well for the first week but then the weather turned very hot. Sissy simply could not keep up with nursing all three kids and she went off her feed and acted like she had an impaction. I treated her with KLPP , oral Formula 11 and the homeopathic remedy nux vomica, which is included it our homeopathic first aid kit . She responded well but I decided to shift one of the kids onto Sally.

Sally was very cooperative and would let Sissy’s kid nurse as long as I fed her and stood close. She was very clear, however, that Sissy’s kid was only allowed to nurse the teat that was not used by her own kid. This seemed fair to me. After a week of keeping Sally and Sissy in separate pens so Sissy’s kid would bond with Sally I put them all together and was pleased to see everyone was sorted out where I wanted them and Sally was letting Sissy’s kid nurse as he needed.

This will certainly free up my schedule which, for the last week, has revolved around goat feedings and keeping my cat and the baby chicks apart. When the cat is in the chicks can go out and vise versa. I now have 2 new sets of chicks and I am just waiting to see if Owl (my cat) tries to go for them. These hens are fierce so I think he will get his butt kicked if he does. Got to love life on the farm. Madalyn