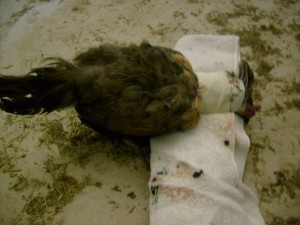 My hen right after the attack

Well, my little hen that Tess and I rescued from the fox did not make it. I nursed her 4 days and she got strong enough to stand up and walk around. I mixed up algae water for her to drink because she could not eat solid food. It was interesting to me that she would not accept any water with soaked feed in it. She also resisted water with any noni or Xango in it. She only wanted the algae water.

I feed all my animals algae everyday and they sometimes avoid eating it. I have seen so many times, though, that when injured animals eat the algae willingly. I used algae mixed with electrolytes or milk in many baby animals that could not nurse for some reason. I have seen foals who were so weak they could not get up easily take a dose of algae and get up and go nurse.

I saw the life come back into my hen after a few days after being almost dead even though she had no nutrition other than algae. I gave her homeopathic remedies to help with her injuries but it was clear after 4 days that she was too damaged to live a happy life. My neighbor, David, was kind enough to put her out of her misery and I put her over the fence for the fox to have.

I don’t hold her death against the fox. He was doing what he had to do to survive. It is my job to protect my stock. My little chicks are almost a month old and I have not let them out of their pen inside the hen house. I took the top off the pen today because the mother hen is starting to lay again so this way she can get out to the nest area. I will watch the cats closely to make sure they don’t bother the chicks.

My brother, Morry, took care of the hen when I was gone on Sun. He was not so forgiving of the fox and told me he threw rocks at him when he came wandering around this morning. I am fine with that. I don’t want the fox getting comfortable with people because I want to let my hens out some when I am outside working. I think we can coexist with the wildlife if we have a few rules. Madalyn