Guest article by Barbara Swanson and with thanks to Mark Segars

The green blood of plants becomes the red blood of animals and humans!

Certain of our body’s unique nutrients have an eerie relationship to pigments found in blue green algae. We are going to discuss one of the most important: Chlorophyll. 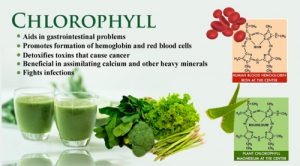 “Chlorophyll is the sun nutrient which is the basis for all plant life activity; the green blood of plants becomes the red blood of animals and humans.” Alive and Well

The Importance of Chlorophyll Rich Foods
Proven benefits include:

The natural alkalinity of chlorophyll assists the body’s pH balance by neutralizing the acidifying and stimulating effect of excess protein, sugars and starch.

How does one take chlorophyll?
Eat lots of raw green foods!

Green foods filled with chlorophyll often also contain other important micronutrients, such as B vitamin complexes, Vit. C, pro-vitamin A (beta carotene). They also contain minerals such as iron, magnesium and calcium, plus the individual phytonutrient antioxidants found in most plants.

We can also get the benefits of green foods through capsules. We need to make sure the products are low-temperature dehydrated and organic or wild crafted. Best sources include wheat grass, different sprouted cereal grasses like barley and oat; and green or blue green algae.