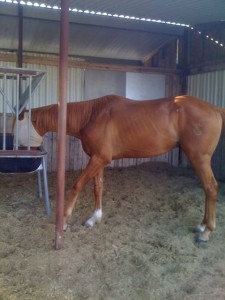 Laminitis in horses is always a serious holistic horse health emergency, but York’s case has been a real challenge. York, a 4 year old, Thoroughbred, race horse was thrown from his trailer when it was rolled in a major wreck. When the emergency workers arrived on the scene they found York standing in the median looking dazed. He had multiple serious injuries but when a vet examined him he found none of the injuries life threatening.

Unfortunately, York’s owner did not want to have him treated and suggested he be put down. The EMT’s on the scene jumped to York’s rescue and voted to cover his care so York’s papers were signed over and he had a chance for a new life.

York’s recovery proceeded well for the first six weeks as his multiple cuts and bruises healed. What no one realized was that a much more serious condition was brewing. Six weeks after his accident, York suddenly became 3 legged lame on his left front leg and radiographs revealed severe laminitis with rotation of his coffin bone through the sole of his hoof. It is likely that the anti inflammatory drugs used after the original injury had masked the pain of a deep bruise in his foot. Once the bruise progressed to an abscess it caused significant damage before the pain became apparent.

When I agreed to examine York I did not have much hope of being able to help him but when he arrived several factors changed my mind.

Despite his condition, York had a great attitude and obviously wanted to live
York’s new owners were very dedicated to doing whatever was needed to save him
York’s laminitis was only in the one foot so he could shift his weight to the other 3
York’s laminitis was not related to any underlying metabolic imbalance
York had a very high pain tolerance
York was gentle and easy to work with

Holistic horse health program for York in the first week:

Remove the shoe on his LF and bandage with sugardine(sugar and sore no more, the sauce) to control the infection
Place a support wrap on the RF
Start him on 2 packs a day of packets with algae, enzymes, and probiotics  to support his digestion and give him extra whole food based nutrition
Feed York 4 times a day to help him gain weight without stressing his sensitive digestive system
Place all of York’s feed and water in a nice shaded area with good footing so he would not attempt to walk around

York came through the first week with no setbacks but he had more problems to come. Stay tuned. Madalyn