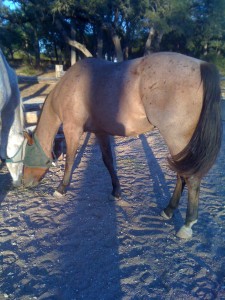 Cooper is a 3 year old colt with everything going for him. He is on a holistic horse care program and trained with natural horsemanship methods. Cooper’s owner loves him and spends lots of time with him but still horse ulcers are a problem for him. How do we know Cooper has ulcers? We know Cooper has a stomach ulcer because he is constantly sore on his left shoulder and ribs. The stomach lies just under the diaphragm on the left side so pain there will affect the left rib and shoulders.

When Cooper’s owner goes to saddle him he turns his head to the left and bites at his shoulder and ribs. At first we thought this was a chiropractic issue and we did many adjustments. The adjustments helped on a temporary basis but the biting when being saddled returned. We were not expecting horse ulcers because Cooper seemed so content otherwise.

Finally, we put Cooper on digestive product Stomach Soother as an experiment. The results were significant. Cooper stopped biting at his side within a few days of starting the Stomach Soother. Cooper’s shoulder tightness improved and he was able to lift his withers. We were still not convinced that our happy, well managed colt could have nasty horse ulcers so we stopped the Stomach Soother after 1 bottle. Guess what, the biting and shoulder stiffness returned within a week. After 3 attempts to discontinue the digestive product Stomach Soother with similar return of symptoms we realized the horse ulcers were real and something we would need to address long term.

We had to ask why Cooper had horse ulcers. He was getting the best care and he was loved. Evidently, this was not enough to prevent the ulcers. When we looked at possible factors we came up with a short list. Cooper’s owner had not started a colt before so there could be some challenges for him in understanding the training process. Cooper also lived with a herd of horses that could get a bit rough with him.

Lack of understanding of his training

Insecurity in his herd situation

Both of these problems will be persistent so Cooper will be on Stomach Soother as long as needed. We have also learned an important lesson that even happy, well managed horses can get ulcers. Madalyn

If you enjoyed this blog please check us out at Holistic Horsekeeping.