I am having so much fun with my goats. When I decided to move to Fischer I was thinking that down the line I would want to get a milk cow but God had other plans. I did not think I liked goat’s milk or even goats for that matter but when Sally came into my life that all changed.

Sally belonged to my cousin but she is mine now along with one of her kids. The other kid will live down the street with my neighbor, David. David has milk goats also and we trade out all kinds of farming activities. I help him with homeopathy if any of his goats have trouble and he gives me lots of greens grown in his garden.

Sally is a sensitive goat. Probably a Fire or Water temperament. I am not to good at typing goats. She has had some rough handling in her life. I don’t think it was anything intentional but the story is that she got an infection when her horns were removed and she had to be doctored daily with a painful medicine. She is very jumpy and sometimes acts like she thinks I am going to hurt her. She does not panic though so I think she is more of a Fire or perhaps and Fire/Water cross.

Milking has gotten much easier. We have a routine where I put her in her small pen inside the bigger pen first thing in the morning before the kids nurse. I milk her then turn her out for the day with her babies so they can browse. About 3 or 4 in the afternoon she comes back into the pen and I again separate her for a few hours then milk her and put her back with her kids. It is still very important that she not run out of food while I am milking but I have figured out the amount that is needed to get the job done.

The udderly EZ  milking deal I ordered has not worked as well as it did with the mares but I am still on a learning curve with it. Sally has really wide teats and it was hard to get them in the special goat adapter that came with the system. I talked to the dealer and he said not to use the insert and that worked much better. I am also ordering a pint size bottle because that is how much milk I am getting on average each milking since the kids are still getting their share. The quart size bottle was taking too long to get the suction going since Sally never has a really full bag. Sally is also not perfect about letting her milk down if she is not totally happy with something.

The good news is between Sally and David’s milk goat we are getting plenty of milk. My cousin, Libby, is making goat cheese and last weekend we made goat milk ice cream. We are also going to make some butter. I took a stab at making goat milk yogurt but I did not have a heating pad to keep the temperature perfect for it to set up. I needed to keep it at 110 degrees so 3 to 6 hours and I tried a water bath but it was too hard to keep the temperature steady. The yogurt tasted good but it was very thin. I will give it another shot when I have the right equipment.

Sally’s kids, Sissy and Prissy, are 2 and a half months old. 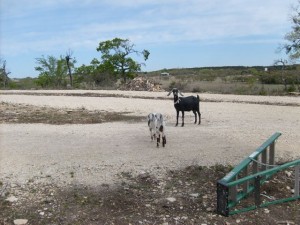 One is a real friendly Earth type and the other is shy like Sally. Both are fine to handle once you catch them. I will probably not wean them for another month or so. I get so much pleasure watching them play and hang out with Sally. Plus they all do a great job of trimming the trees. Goats are great fun! Madalyn