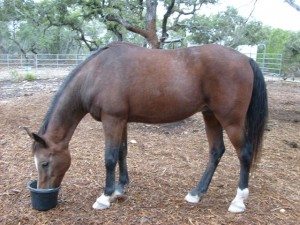 Food sensitivities in horses are hard enough to deal with but in Bud’s case it turned out he was battling a tumor as well. Bud came to my clinic in June 2009 with a history of severe weight loss and colic symptoms. After observing Bud for some time it became apparent that he was frequently uncomfortable right after eating. This prompted me to test him for food sensitivities.

Sure enough, Bud came back sensitive to many common horse foods including grass and alfalfa hay. Horses can develop food sensitivities when they have digestive tract damage leading to ulcers. Ulcers in the digestive tract allow undigested proteins to be absorbed which triggers an immune response to those foods in the future.

With a suspected diagnosis of inflammatory bowel disease and food sensitivities I put Bud on a restricted diet and gut reconditioning program. Bud did beautifully on the therapeutic program of KLPP and UF. His diet was 1 pack a day of algae, probiotics and enzymes, Kool and Kalm extruded feed, beet pulp and cooked carrots. Bud gained almost all his weight back, stopped having colic and seemed to be on the mend.

My plan was to hold Bud completely off pasture for 6 months to give his gut time to heal and then gradually introduce him to hay and pasture. After about 2 months on the restricted diet, Bud got very depressed and backed off eating the bland feed. He started losing weight again and with winter coming on I felt I had to let him have more to eat. I tried a muzzle and pasture turnout but the pattern of colic and weight loss returned.

Bud would go through periods of eating well and then for no obvious reason he would stop eating and get painful. I began to see a pattern of emotional upset triggering his setbacks, especially when his owner had to leave town for extended periods to care for her mother. With this observation I started focusing my treatment on keeping Bud happy. I gave him Eleviv along with homeopathic remedies and again it seems like we were making progress.

Around the 4th of July 2010 Bud cut way back on his eating and his colic became more frequent. Nothing seemed to help including steroids. I could control his discomfort with very small doses of Banamine but I was having to give it more and more often. Bud became emaciated but kept his perky attitude when he was not in pain. On July 23 Linda’s owner took him home to spend a few days with his herd. After he was put down an autopsy revealed a calcified tumor like structure the size of a small football located at the opening between his cecum and large colon. Some areas of inflammation appeared around this area but most of the gut looked good.

In hindsight I wish we had let Bud go sooner but he bounced back so many times that it was hard to give up. He was such a special horse and his owner was extremely attached to him. I suspect the growth occurred in an area of the gut where the inflammation had been the most severe. Even as the inflammation subsided the mass continued to grow giving a very mixed symptom picture. The food sensitivities complicated things even further.

I have no way of knowing if the tumor was there from the beginning but it certainly did seem like Bud was on his way to full recovery at the end of last summer and into the fall. It would think that if the tumor had been the issue, Bud would have continued to decline rather than improve. I hope I never see another case of inflammatory bowel syndrome in a horse but if I do I will have a clear plan.

Things I learned from Bud

Weight loss
Loss of appetite
Laying down for extended periods without obvious pain
Stretching out back legs and looking at sides
Eating dirt
Alternating soft manure with rock hard, mucous covered fecal balls
Episodes of colic and lack of appetite alternating with normal appetite and lack of pain

Focus on the emotions. Try to manage the horse to keep him happy and keep stress to a minimum
Give probiotics and digestive enzymes to help break down food so it does not trigger an immune response
Build up the mucous layer in the gut with conditioning digestive products such as KLPP, UF, Aloe/Slippery Elm, Succeed and Gastroplus
Do food sensitivity testing and limit offending foods when possible
Do regular body work to release abdominal adhesions and tension in the TMJ
Use low doses(3cc) of banamine and or ace(1cc) as needed to relieve abdominal cramping
Give Eleviv(4 to 12 a day) help combat stress