Bud continues to improve with his food sensitivities. He is now eating some grass  like a normal horse and so far no colic. Now that he is getting to graze an hour a day he is not wanting to eat his beet pulp. Bud still gets his vegetables and his preference is, in order, carrots, sweet potatoes, cabbage, zucchini squash and kale. He does not care for chard or pumpkin.

I have always been puzzled about what caused Bud to go from a healthy pasture pony for 22 years to a digestive disaster. Now I think I know. I had my equine dentist, Gregg Mckee, in town last week and Bud was due for work. When Bud first started having trouble last year I had suggested Linda have his teeth checked and she reported back he did have an infected incisor that was removed. Since Bud continued to get worse I assumed the tooth was not the issue.

When Gregg checked Bud’s teeth he commented that several incisors were missing and also a large amount of his jaw bone. Linda brought us the original report from the previous dentist and it was obvious the work done was very extensive. Now I am convinced the original injury and ongoing pain during healing after extractions caused the stress to Bud’s system that set him up for recurring colic and food sensitivities.

This time Bud had a fracture to one of his molars so his teeth have probably been an ongoing issue. This explains why I have had to do repeated cranial sacral releases for him. Since the last dental work Bud has been very happy and active. I am considering building him a pasture so he can go our several hours at a time with no concern about him getting into any hay. He would also be closer to the other horses.

On dentist day Linda brought Bud’s horse friends over and they got to hang out in the pen with him. Bud was so happy to see his buddies. I know he is lonely staying up in the small pen so a pasture would be great until he is well enough to go home and be on pasture full time. Linda has been such a great owner, bringing all the produce for Bud and taking him out to graze. I will miss them both when he goes home. Madalyn 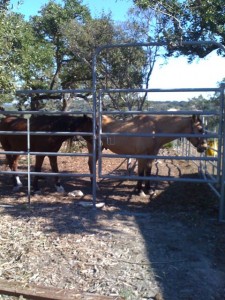 Bud with his friend, T Buck