I have not reported lately on all the animals and thought it was time for an update. They are all doing fabulously. First, the chickens. My 4 chicks that were born last winter are now adults and laying eggs like crazy. I had 3 hens and 1 rooster and now one of the hens is already sitting on a clutch of eggs. I saw her on the nest 2 days in a row so I reached to move her to see if she was sitting on eggs. Sure enough she almost took my arm off so I think she will be a great mother.

Of the 7 eggs my game hen was sitting on only 4 made it to hatching time and of those 2 hatched. I lost one of the chicks during the extreme heat of the summer but the surviving chick is now a teenager and doing well. I thought this chick was a rooster but now I am not sure. As it has matured the curl has come out of the tail feathers and I don’t see a comb developing. I am so new at this that I still make lots of mistakes in picking the sex of chicks.

The goats are great. I get so much entertainment watching them. I have my neighbor’s young billy goat in with them so they should both be pregnant soon. I hope Sally has her kids first so Sissy can see the process. I think Sissy will love being a mother because she is so friendly. Sally has settled down so much since I have had the on the new Xango product, Eleviv. This product helps with handling stress and Sally had never fully recovered from her dehorning trauma as a young goat.

The cats are happy. Since it is now cooler at night they are bringing themselves inside so I don’t have to go find them at curfew time. I don’t have any mice or snakes around so I believe they earn their keep. To feed them I order Wild Kitty premix that I mix with raw meat. At first they did not care for my cooking compared to the frozen food that Wild Kitty ships but I explained to them about the economy and how we all have to make sacrifices. Not sure they really got the lecture  but they started eating the food I prepared.

The horses have never been better. Remi has turned the corner from his nervousness and I took him to a clinic a few weeks ago. To my surprise, Cerise did not seem to mind me taking him rather than her. Cerise is enjoying being ridden at home and gradually getting her muscles built back up after her second bout of EPM last spring. When I ride Cerise I let Tess and Remi come along and they graze and run around having fun. Remi is a bit clueless and thinks grazing one place is as good as any other but Tess just lives for these outings.

I am finished with all my traveling for this year and I am so looking forward to a quiet holiday season hanging out with the animals. Madalyn 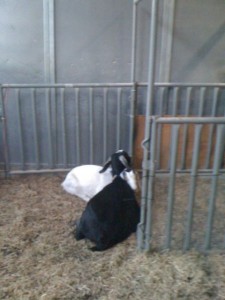 1 thought on “Update on the animals”