I had an interesting experience as I was filling the horse trough. I had brought a book out and was sitting next to the trough watching the horses eat and waiting for the water to run in. I don’t dare try to do anything else when I turn on the water or I end up running the trough over.

I was enjoying my relaxing time and everything seemed normal until the trough was about half full then it seemed like it was taking forever to fill the rest of the way. Water was coming out the hose but it was not full pressure. We have had a very dry summer but it has been raining recently so I felt my well was OK.

I waited longer but now the water was hardly coming out at all. I went and checked my other faucets and they were fine. I looked for kinks in the hose but it seemed to be good. I was perplexed until I looked closely at the bottom of the trough and found my answer.

When I had dumped the trough over to clean it I had set it back down on a piece of the hose and it had not gotten smashed flat until the trough was almost full. This got me thinking about other times in my life when I have been frustrated that things were not happening as fast as I thought they should.

I suspect I have been guilty in many cases of shutting off the flow of things by trying to do too much myself. I find with many of my projects I am able to move them to 50 or 75% completion but then I get bogged down. It is at this point that I would be much better served to let God take them to where he wants them to be rather than attempting to fight forward with my agenda.

Life is not supposed to be a struggle and while some waiting does build faith our hopes and desires are not supposed to be deferred indefinitely. God’s grace flows to us when we stay in relationship with him and follow his guidance. When we fall away and try to provide for ourselves it is like the water trough sitting on the hose. The more we get full of ourselves the less grace can come in to make us really full in spirit. Madalyn 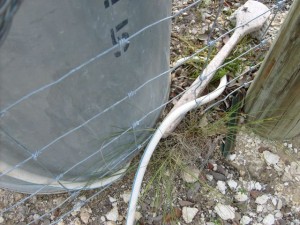 2 thoughts on “The trough that would not fill”