As some of you know I have had some challenges with my milk goat, Sally. She is very spooky and was not at all impressed with my initial milking attempts. We have grown to understand each other but she is still not what you would call a gentle goat.

On the other hand, her kid, Sissy is the friendliest goat I have ever seen. Prissy, the other twin, is much more skittish like her mother and I had to make the choice of which one I was going to keep. Normally, I tend to take on animals that are more of a challenge but all my friends encouraged me to keep Sissy.

I did pick Sissy and I am so glad I did. She is such a joy. She will leave her food to be petted and when Sally gives me a hard time about coming into the pen, Sissy leads her in. A few days ago, Sally was being difficult and I was following her and Sissy around with the flag to get them in the pen. Sissy got very upset and left her mother to go into the pen by herself.

I could tell that Sally was surprised at this but she reluctantly followed. I hope eventually Sally will settle down and trust people more. Madalyn

PS Prissy belongs now to my neighbor and she is getting more gentle. 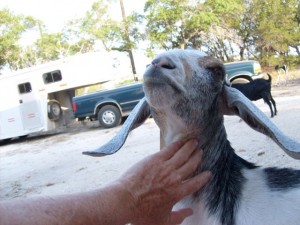