I thought I had beat this cold but it came back on me so I have been resting the last few days. I am so grateful that I have the opportunity to rest as there have been times past in my life where I had to work whether I felt like it or not. Tuesday night as I was half asleep I heard Sally, the nubian goat, crying and sure enough she was having her kids. I was so excited to see everything going well and she delivered two darling baby girl goats easily.

Sally belongs to my cousins and I am going to milk her and we will all share the milk and cheese. She is a bit shy and I have been spending some time with her to gentle her down. She is not terribly afraid but she does not like to be touched. Evidently she had some rough handling when she was dehorned and she has not forgotten. She now lets me pet her when she eats and I can stroke her with the flag I use with the horses. This morning she let me pull some hay off her bag that had been stuck there with some afterbirth. 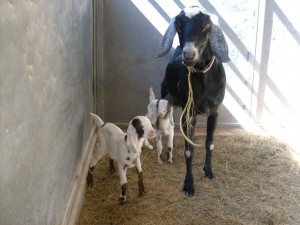 For a while I had Rosco, the billy goat, up here keeping Sally company. He was a cute goat but like any young male animal he was always into something. In addition to the Rooster and Lady, the donkey, to wake me up in the morning I had Rosco scratching on my window screen. When he was not up at the barn checking on Sally he was out in the pasture tormenting the horses. My neighbor called me one day to say that something was upsetting Cerise in the pasture and when I went to check I saw Rosco standing on one side on the fence and Cerise rearing and charging him from the other side. It is not like both of them did not have 5+ acres of their own but they had to fight across the fence.

Sadly, after the kids were born Rosco’s owner picked him up to take him to the auction. He will be sold as a breeding goat so he will be happy but I will kinda miss him. I think Tess will too even though she did have to pop him in the nose once to get him to leave her alone. I was watching and she timed her kick just perfectly to barely touch his nose but it still gave him a nosebleed and he backed off. It is so amazing to watch how all the animals interact with each other. Owl has pretty much stopped chasing the chickens and I can’t wait to see if he plays with the new little goats. He is spending quite a bit of time in the stall with them now and Sally does not seem to mind him. Madalyn