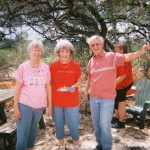 I started this blog with my move to Fischer and a big part of my decision to make this move was to be close to my cousins, Libby and Sonny. With adjoining properties we could share in our mutual ranching and farming aspirations. Sonny jumped into action right away by helping dig the 4 foot deep post hole to set up a large wooden cross.

Next he helped me tackle moving brush around that could not be burned due to drought conditions. Once we were able to shift brush enough to make a plan, Sonny helped me put up 5000 feet of fencing. With the exception or a few drilled holes we dug post holes, set posts, pounded T posts and stretched wire all during record drought and heat.

While my well paid carpenters and plumbers were often MIA, Sonny was always waiting with tools in hand to do whatever was needed. Did I mention Sonny was 77 years old. About 1 year after I moved in, Sonny started having problems with memory. We did not think much of it but by Thanksgiving other signs of general weakness appeared.

Shortly after the new year we had a diagnosis of inoperable brain tumor. Five months later Sonny was gone. It was not an easy process for Sonny but the final hours were very peaceful. He will be missed. Madalyn

1 thought on “My cousin, Sonny, passes away”