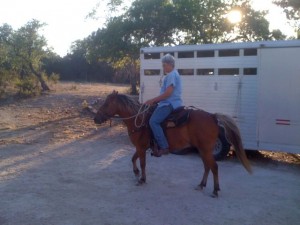 Punkin, my Wood/Fire (Jue Yin) pony, is coming along great in his training. He has a very willing attitude and wants very much to please me and my friend, Kim. The Wood horse temperament is more likely to slow down and buck when he is upset and the Fire Horse temperament is more likely to go faster. The challenge for Punkin, as a Jue Yin, is that he tends to get his feet stuck and when he does move he moves off quickly. This stop and start movement makes it hard for Punkin to relax.

We have focused much of Punkin’s training on helping him smooth out his mental state so he can be smoother when moving his feet. Kim has spent many hours just leading Punkin around and allowing him to graze. Even a simple task like leading can build good habits or bad habits. Kim is careful to make sure she directs where Punkin grazes so he does not drag her around.

When Kim leads Punkin from one grazing spot to another she makes sure he does not get in front of her. If he does barge ahead, she stops him and backs him a few steps in a straight line. If Punkin backs crooked she moves his shoulders to line them up with his hind end. This helps Punkin free up his shoulders and get softer in his ribs.

I have stepped on Punkin several times and walked him around so it was time to go  on to trotting and loping. My neighbor has a nice big round pen so Kim and I took Punkin over there last Sat. Punkin was a bit tense but walked and trotted well both directions and had a few nice steps across with his hind end as we came back to a halt. His lope to the right was fine but I could feel him sucking back as we changed to the left direction. I thought moving him up to the lope might free up his feet but instead he kicked up and threw in a few bucks.

I knew Punkin was not trying to be bad so after he made it around the pen once without bucking I slowed him back to the walk. I could tell Punkin was bothered so I got off and spent some time doing ground work until he relaxed. It is very important for us that Punkin enjoy his work and not be tense about it.

I called my mentor, Linda Hoover, and she suggested a few groundwork exercises to help Punkin bend better through his ribs. Sure enough, this morning Punkin was very stiff through his ribcage. Just a few steps over with his hind end followed immediately by several steps back helped him release mentally and in his body. He licked, chewed and yawned several times. Then I worked him briefly at the end of the rope to move his front end one direction, then the other and then stop square to face me without stepping forward. Punkin thought this was a fun exercise and we were able to stop with him in a great place.

I am so grateful to understand that as a Jue Yin horse temperament, Punkin was not trying to misbehave when he bucked. Punkin would have been horrified if I had punished him because he could not help that his body was tight. It felt bad to him and that was why he bucked. Even though I praised him for going all the way around in the lope Punkin was still mentally bothered. I won’t lope him again until I am sure he is able to move out smoothly. Madalyn