When I built my new place I expected to have the occasional overnight horse guest but I was not really thinking about a hospital. Well, God had other plans. I started helping Dr. Groves with a few laminitis cases at her barn in San Marcos and it I realized how much I missed working hands on with these horses. I gave up doing long distance consults because I could not get enough details about the horses and had no control over the hoof care. Although, Luann has a great clinic I felt I was nat able to observe the horses enough to help them other than with the trimming and I was not able to get over to her place to trim as often as I would like.

So even as these thoughts were developing for me I started getting calls on laminitis cases. Needless to say I already have one in the barn. Her name is Benito and her owners were very understanding as I was moving trailers getting her stall ready as they waited to bring her in. I had to scramble to find all my supplements but rounded them up and started her on my support program. I felt she needed aloe and slippery elm for her stomach because she was very tight. I mixed this up with acidophilus and gave it to her in a syringe. Benito was not at all interested in the low carb feed we offered so I mixed her a small bran mash which she liked.

I know many people believe bran is terrible for laminitis cases because it has a high NSC but I have used it for years with wonderful results in all but the most extreme IR cases. Even though bran is high in NSC it also is high in many nutrients such as chromium, magnesium, manganese and silica which all support carbohydrate metabolism.

Benito foundered on mesquite beans and interestingly she is worse on her back feet. I was pleased Tues morning to see the swelling had gone down and she was moving better. She had had 2 gms of bute on Monday morning but non since. I kept up the acidophilus, aloe and slippery elm and added Q10. She was now hungry and eating the low carb feed very well. I fed her several the low carb feed in 5 small feedings and she ate everything. I also gave her a very small bit of alfalfa and a couple of small bran mashes because the weather was so dry and hot.

Wed morning Benito was not as good. She was holding up her right hind which is her worst foot. As I was standing on my head filing the clinches so I could remove the heart bar shoe I was asking myself if maybe I had forgotten some of the less exciting aspects to working with laminitis cases. I spent about an hour trying every boot and pad I had on her bad foot and I trimmed it carefully to see if there was anything that gave her relief. She was actually happiest with no boot or pad and her heel trimmed down. I put a poultice on the foot and no boot. My feeling is that I have to get her feeding program adjusted before I am going to see sustained improvement in her feet. I already have blood work showing her glucose is high so I am waiting to get the other test back to see if she is IR, Cushings or both. I suspect I overfeed her a bit on Tues.

Thurs morning Benito is still sore and unfortunately the swelling is back in her legs. I am going to give her less feed today and more aloe mix by mouth to support her digestion. I don’t want her to lose weight or not have her calorie needs met as this will only drive the IR. I also have water in buckets all over the pen so she won’t have to walk far to drink. I have free choice hay for her but she is not eating as much as she should to meet her needs. Her manure looks fine so  am not worried about her being dehydrated. She has shade but prefers to stand in the sun. I gave her Thuja on Wed and will watch her to decide what remedy she needs next. Madalyn 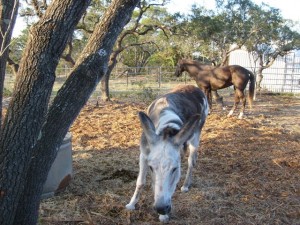