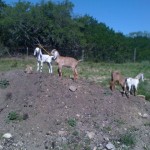 I pride myself in taking good care of my animals so I was appalled last week when I realized I had a wormy goat crisis on my hands. This came to my attention when I loaned Sissy to a friend who needed extra milk. After Sissy moved to her new home she dropped weight quickly and my friend checked and found her to be anemic and loaded with worms.

I felt so bad. I had checked fecal exams on the goats earlier in the spring but then we had an exceptionally wet June and July. Sally and the 2 female kids of Sissy’s  were fat and slick but the little boys, who had been weaned and turned out on pasture, were thin and they also had worms. So life around the farm was put on hold until every goat was dewormed.

With the horses I rarely use chemical dewormers but instead give them a powdered alage blend or packets of algae, probiotics and enzymes daily and 15 sim Spectrabiotic/1000# on the full moon. I also checked them and they were all fine. I have tried to give the goats the powdered alage blend but they would not eat the powder. I would give them a full spectrum probiotic but I was not sure which goats ate it. Obviously not Sissy.

I believe that general good nutrition will build a healthy immune system and therefore provide resistance to most parasites. Sissy was under more stress than the other goats because she had to raise triplets. The 2 boy kids were weaned before the little girls so they had more stress. I was not diligent in making sure they got the algae regularly. Now I am giving them tablets of whole bluegreen algae and they seem to be eating them.

It does cost extra money to feed these supplements but I considering the stress this wormy goat crisis has caused, I feel the cost is justified. Madalyn