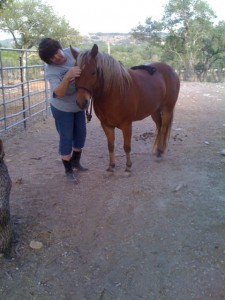 Details are so important in refined horsemanship including how to properly catch a horse. Punkin, my new welsh pony, did not want to be caught. He was easy to catch in the trailer when he was delivered, but once he was loose in a pen he was not so good.

Punkin would wheel and take off as soon as I approached him with the halter. I knew I could always run him into a small pen to catch him if needed so I was in no rush. My friend, Kim, has been working with Punkin and she was in no rush either. Punkin is a Wood/Fire(Jue Yin) horse temperament so we felt the best way to catch him was to make being caught fun.

We decided to leave the halter alone and just let Punkin know we were good people. We would go in his pen and approach him nicely and if he ran off we encouraged him to move a little more. When Punkin stopped moving we approached him again and if he moved off we kept him moving. I was careful to watch Punkin closely and take the pressure off him when he looked my way. I wanted him to know that moving or stopping was his choice. This pressure release way to training is very important in a refined horsemanship approach.

Pretty quickly Punkin decided stopping was better. In no time we were able to approach him and rub him all over.

To catch a horse, especially one that does not want to be caught, it is important to hold your halter in a way that makes it easy to put it on quickly. Kim practiced holding her halter while she was petting Punkin but she did not try to put it on him. Gradually she was able to hold the halter in the way she would need to to catch Punkin and hold the rope in the hand she was petting with. This helped Punkin realize the halter was not a bad thing.

After 3 weeks of lots of rubbing and petting we decided Punkin was ready to be caught. The first time I reached to put the halter on Punkin did his little wheeling move and by some miracle I was able to give him a little pop on the butt with the lead rope as he took off. Normally I would hit myself with the rope so God was helping. Punkin did not like being spanked and he made a fast circle back to me and gave me a look that said, please put that halter on me so I don’t get in more trouble.

With the halter properly organized, I was able to reach over Punkin’s neck and grasp the tail of the halter so I had a bit of a hold on him. He started to pull away but as soon as he felt the halter around his neck he stopped and let me slip the halter over his nose easily. Had I tried to put his nose in the halter before putting the tail around his neck he probably would have run off again. Punkin is now easy to catch.

How to catch a horse:

Put the horse in a small enough enclosure that you can keep him moving.
Approach the horse with confidence, never try and sneak up to him.
Make the horse move if he does not want to be caught. Let him rest when he looks back to you and build his confidence that you won’t force him.
Rub the horse on the neck with the halter and take your time so he can relax. Ideally, wait for him to drop his head and lick and chew.
Make sure your halter is organized and ready to be put on.
Hold your halter in your left hand. Reach over the horse’s neck and bring your left. hand under the neck and grasp the tail of the halter rope with your right hand that is over the neck. You now have a bit of control of the horse. Alternatively, you can slid the lead rope over the horse’s neck and hold it while you prepare to put on the halter. The goal is to gain some control of the horse before actually trying to halter him.
Once you are holding the tail of the halter in your right hand and you have some control, you can use your left hand to gently guide the halter on to the horse’s nose while you help lift the halter up with your right hand.
Then buckle or tie it your halter on your easily caught horse.
Rub and pet your horse.

Knowing the details on how to catch a horse properly is an important step in a refined horsemanship approach. Madalyn

1 thought on “Refined Horsemanship: How to catch a horse”