I took Remi to a horsemanship clinic with Tom Curtain this weekend. I have not ridden Remi in over a month because of weather, travel and my health so I was really asking a lot of him. I have been letting him and Tess come along on the few rides I have made on Cerise and I have brought him up regularly to change his boots.

My friend, Rita, went to the clinic with me and we both got there about noon on Friday. Remi was glad to see Rita’s mare, Kate, and they got to stay in the same pen. Remi was totally relaxed when I saddled him and willingly came up to the fence for me to mount. At the Buck Brannaman clinic last March he had been very nervous about being mounted from the fence. I had only worked on this a few times but he was perfect.

We had about 12 riders in the class and Remi was happy to get along with everyone. He paid close attention to me and tried hard to do everything I asked. His feet did not seem to bother him at all but he was still very stiff in his shoulders. Tom said the work on stepping one front leg out as we were walking and then straightening out would really help him. It was also very difficult for Remi to travel with his hindquarters in at the walk and trot.

The class on Sat. was good as well. When we loped Remi was willing but would not move out well on his own. I was not sure how much to push him so I asked Tom about this before the session on Sun. afternoon. I felt Remi was as stuck in his mind as he was in his body and he did not trust he could move out. I was concerned that if I pushed him his stuck energy might come out in some bucking but I felt there was no better time to find this out.

Tom watched us lope and told me to “chase” Remi to go faster. We got to racing around pretty fast but Remi was still tight and braced in his body. Tom said to keep him going and slow him down and speed him up repeatedly. I never felt like Remi was going to go to bucking but he sure was had to sit down on. After about 20 times around the arena with multiple changes of direction and speed, I felt Remi start to relax. His body got less tight and he was easier to sit down on. He got so smooth that Tom asked us to lope a circle so he could explain something to another rider. I was so proud!

The last thing we did in the afternoon was to divide into two teams and do a little gate opening contest. Each team member had to ride over the the gate, open it and ride through, then back out and close the gate. It was a very relaxed, fun contest but I had not done any gate opening with Remi. I was so pleased when he loped right over to the gate, opened and closed it without missing a beat and loped back to his place like a pro. He did seem a little confused about if I wanted the gate open or closed but he worked with me even though he thought what I was asking was a bit strange.

After we finished and were sitting on our horses as Tom asked for questions Remi shook his body so hard I had to grab the saddle horn to stay in the middle of the saddle. This is the same horse that a few months ago was breaking in to bucking every time I saddled him. I changed to way I worked with him and talked firmly to him when he got worried rather than trying to sooth him. I realized I was treating him more like a Water horse than the Metal/Earth cross that he actually is. This small change made all the difference. If you are not familiar with Five Element horse temperament typing you can check it out at my horseharmony website.

Remi has made a shift that I think will be permanent. I am no longer concerned about him bucking and I am looking forward to many great rides. Madalyn 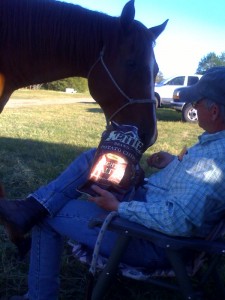 1 thought on “No more bucking for Remi”