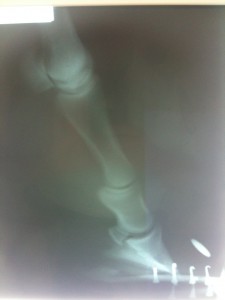 York ended up losing 3/4 of his hoof wall on the LF. His hoof wall jammed up into his coronary band and had to be filed and cut away to allow for new hoof to grow. The large wedge of dead laminar tissue between the detached hoof wall and the coffin bone was acting as a perfect breeding ground for bacteria so most of it was removed as well.

I went back to Xango wraps on York’s hoof to keep the inflammation down so excessive proud flesh did not form around the coronary band where the old hoof had pressed on it. For 5 to 7 days York’s hoof was just a mess. I finally scoped on the the fact that York was not able to begin a healing response because his body had been stressed for so long and it was depleted. The amounts of supplements I had been giving were not enough. I doubled York’s Simplexity Essentials to 2 packs a day and added 1 TBS twice a day APA blend, spiked with Citrus C/Q.

Within a few days I saw a dramatic improvement in York’s overall condition and his hoof seemed to be stabilizing. The drainage decreased substantially and I could see where new healthy tissue was growing over his damaged coronary band. My farrier, Cecilia Adamson was finally able to remove the racing plates on York’s other 3 hooves and get them trimmed. York was so cooperative despite his discomfort.

With continued Xango soaks, in 2 weeks the proud flesh at the coronary band completely resolved. York was starting to put some weight on the foot and all was looking good but York still had some rough stops to get through. More to come. Madalyn