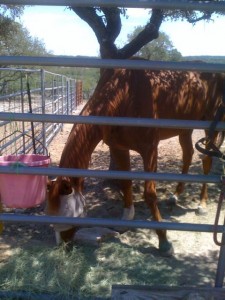 Laminitis in horses is always bad but for poor York it was devastating as he was recovering from his bad trailer wreck. York’s system was already stressed and I worried about his overall nutritional status. His coat was dull and he was about 100 pounds underweight.

My first goal was to get nutrient dense food into York so his body would have what it needed to heal his severe hoof damage from the laminitis. I also wanted to support his digestion so he would not colic. Packets of bluegreen algae, enzymes and probiotics  fit what I wanted. Each pack contains 1 acidophilus, 1 bifidus capsules, a cap of enzymes and 2 caps of blue green algae. I started York with 1 pack twice a day along with free choice hay and feedings of low starch Kool and Kalm 4 times a day. Rice bran was added for calories.

After a week, even with the extra nutrition, I was not seeing the healing I wanted in York’s injured foot. The abscessing continued and I was changing his bandage twice a day because of the large amount of drainage. I decided to change from the sugardine dressing to Xango(mangosteen) juice. Xango is high in anti inflammatory agents and I felt we needed this action more than the antibacterial action of the sugardine.

Within a few days of changing to Xango juice topically the drainage  slowed down and the tissue looked much less angry. Unfortunately, the damage was already done and York’s hoof wall separated from the underlying tissues at the front part of his foot. Check out this video of me removing part of the hoof wall. More reports to come. Madalyn