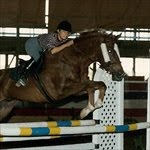 My friend, Stephanie, had a horse we all thought was simply a lazy horse but we were wrong. Marcus was a jumper and Stephanie would have to kick him constantly to get him around the course. Even with a good holistic horse health program, Marcus remained a lazy horse who would get slower each day at a 3 day show.

Marcus also had numerous low grade health challenges. He caught every cold that came through the barn, despite being vaccinated for everything. He would swell up in the glands around his throat until he looked like a chipmunk. He had skin allergies and occasional loose manure.

Even at home, Marcus was a slow and lazy horse. He would stand with his eyes closed as Stephanie tacked up and we once even thought he had narcolepsy because he would almost fall down while being saddled. After lots of searching and study to find the prefect holistic horse health program, what we finally figured out was that Marcus was not a lazy horse, he was a stressed, sleepy horse!

Marcus was suffering from the effects of low term stress. His nervous system was stuck in the fight or flight, sympathetic mode which was causing all kinds of havoc. Symptoms of stress in Marcus included:

1. Poor sleep patterns – Marcus did not sleep well at night because his hormones were out of balance. A horse under stress can’t shift into the relaxation, parasympathetic state needed for good sleep. The sympathetic state keeps the horse on high alert so sleep is just not an option.

2. A weak immune system – In the fight or flight state, the hormone, cortisol, is released in high levels and this lowers resistance to infections.

3. Allergies – In the sympathetic state, even as the horse is less resistant to infections the antibody producing part of the immune system goes into overdrive creating allergy symptoms.

What we did with our holistic horse health plan for our lazy horse, Marcus:

1. Instead of bringing Marcus into the stall at night we left him out with his horse buddies so he would feel safe with the herd.

2. We increased his packets of bluegreen algae, probiotics, and enzymes to 2 packs a day to support his digestion and immune system.

3. We stopped all vaccinations until we felt Marcus could respond appropriately. See my vaccination ebook to follow our thinking on this. At this time I did not know about the stress relief product, Eleviv , but I would now include this to bring the nervous system back into balance.

Within a few weeks our holistic horse health plan started working and Marcus was no longer a lazy horse. Marcus started enjoying his job and now 15 years later, still teaches kids to jump as a lesson horse. Madalyn