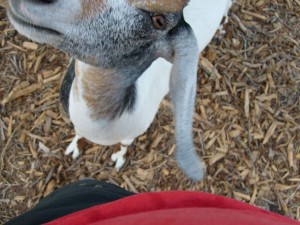 Got to love that face

Other than the chickens routinely allowing themselves to be eaten by predators, my animals have been behaving. That is until yesterday. I went out to feed and Sally was crying and there was no sign of Sissy. I listened and sure enough, I could hear Sissy crying back from a distance.

Further investigation revealed Sissy had found a hole in the front fence and was out on the shoulder of the highway. My front fence is not new and although fine for the horses evidently not for goats. My cousin, Sonny, says fences need to be waterproof to keep goats in and he may be right on that. The hole Sissy went out did not seem big enough to get her back in.

I have not taught Sissy to lead and I was paying for my oversight as I tried to move her down the fence line to the gate. I put my belt around her neck and then tried to push on her butt to get her moving. Well, she would shoot forward and practically jerk my arm out of the socket then she would set back against the belt and I would lose the ground I gained when she shot forward.

I finally managed to use my belt to control her head and sort of shoveled her rear end forward. We made it to the gate and she stayed with me as we walked up to the pen where Sally was waiting. I patched the fence but believe I will need to keep the goats out of that pasture so they are confined to their pen until I can figure this out.

Not to be out done I went to bring Owl, my cat, in last night and found him playing with a snake. Not sure what kind it was as I was able to scoop him up before he could get it in his mouth. I have two new baby chicks and so far they are behaving. Madalyn