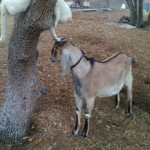 Sometimes things happen so fast and furious that all a person can do is hang on and survive. That is the way I have felt for the last several weeks. Most of the activity has been good but there have been some low spots as well. Here are the highlights of the last few weeks for those who have wondered why I have gotten so far behind on my blogging.

I have reconnected with a childhood friend and it turns out that she and her partner have a small dairy a few miles down the road. How cool is that! I sent Sissy to stay with Portia and Sedonia because they needed extra milk for their cheese making. Sissy dropped a bunch of weight after the move and we determined she had worms. After deworming, Sissy continued to lose weight and then developed pneumonia. We almost lost her but now she is looking good.

I made the trip to help move my friend, Stephanie, from Colorado to California. We hauled her horses straight through and would have made it in 17 hours except for a missed exit. After missing the exit we could not find our way back to the highway but the road we were on did connect with the highway we were wanting to exit on. The problem was that the map did not mention the 9000 mile high mountain we had to cross to get there. We arrived safely after 22 hours of driving and the horses were perfectly fine.

I had a few patients here at the house that kept me busy. Vegas, a barrel horse, had a twisted sternum and had gone into a burnout state from the prolonged discomfort that kept him from properly doing his job. It took Janek Vluggen, Dr. Luann Groves and myself to correct the twist which was seriously affected the function of his heart by putting tension on the surrounding connective tissues. Once the twist was corrected, Vegas was better but still not coming out of his burnout state. I put him on Eleviv at 2 capsules a day and he is doing much better and back in training.

Another patient was Toby, an insulin resistant horse who was very sore with laminitis. His owner had tried to balance his diet but the feeds were not low enough in sugar. I started Toby on timothy balance cubes and Triple Crown Safe Starch forage. I fed him only 1.5% of his body weight and he started doing better after about 10 days on this diet. I also did Bowen therapy and homeopathy but the diet was the real key. As much as I would have liked to keep Toby barefoot, we elected to put on shoes with fill in pad material because of his thin sole and inflammation of his coffin bones. With the new shoes and strict diet he is running around now.

I had been working my mare, Cerise, over most of the summer but instead of getting stronger she seemed to be struggling more. She wanted to work but could not seem to go past a certain point with her balance and collection. I suspected her stomach was bothering her and sure enough when I checked with Leta, my friend and expert animal communicator, this was the case. I had her on her usual  blue green algae and digestive product KLPP but now I have added in digestive product UF . Plus I am giving her a few weeks off work. Remi is happy to fill in and get some extra attention.

I lost one of my baby goats when he was castrated. I had found a pet home for him but had waited to do his castration in case he was anemic after having the worms. I ordered special drugs to sedate him and his brother and picked a day with good weather and proper moon signs. He did bleed more than the other one but I did not think it was that bad. He seemed fine but later in the evening he went down and it was obvious he was not going to survive. I can only believe he was still not fully recovered from the anemia even though he was fat and shiny. I had no idea how attached I was to him until I lost him. I have never managed to develop an acceptance of losing animals from anything other than old age even though I know it can sometimes happens no matter how careful you are.

The chickens are doing well but I have 5 roosters that need to go somewhere else. The cats are great and the place is looking nice and green with all the rain. Fall is in the air and I am looking forward to a slightly less eventful Oct. Madalyn