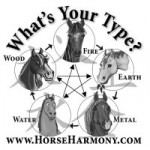 If you don’t know what motivates a horse to perform, how can you train your show horse to be a healthy and happy athlete? This was certainly the dilemma faced by Beckett’s owners … and many other people in the horse world as well!

Beckett was a beautiful fine-featured Hanoverian gelding who was bred for dressage and had worlds of talent. In fact, he was so talented that an Olympic dressage rider and trainer once offered to buy him on the spot at a clinic. But Beckett’s owner wanted to ride and train the gelding himself instead. The problem was that he couldn’t figure out what motivated the sometimes fractious gelding to perform.

Beckett’s Behaviors
The gelding was certainly a horse temperament typologist’s dilemma because he would appear to be one type one moment, and another type the next. For instance, consider the following behaviors that would put Beckett in several different temperament categories:

Wood Horse
– Difficult to handle on at shows, especially on the ground
– Intimidating presence
– Could not seem to focus in the midst of high activity

Temperament Typing Beckett
When confronted with these seemingly contradictory behaviors, Beckett posed a definite puzzle for a horse temperament typologist. Of the three possible types above, the easiest to eliminate is the Wood horse temperament. As noted in previous newsletters, while it is possible to bend a Wood horse to your will and make him do dressage, this type of horse does not truly enjoy the refinement and repetition of this sport. He prefers speed and the thrill of the chase. So Beckett was not a Wood horse despite his poor ground manners and intimidating presence.

Beckett could then be either a Fire or Water temperament type. Both types possess beautiful animated movement and tend to run rather than buck when overwhelmed. Both types can also excel in dressage, and neither type accepts harsh correction easily.

However, the Water horse is more likely to spook and quickly lose control, with little sense of self-preservation while the Fire horse can be distracted at a show, but won’t lose all control. Upon further questioning the typologist discovered that Beckett had loads of self-confidence and was rarely frightened. Instead, he was easily distracted and tended to “run over” his handlers because he had learned early on that his enormous size (17 hh) helped him win battles against his handlers. That tended to push Beckett into the Fire horse category rather than the Water horse type.

The Final Piece of the Puzzle
What finally convinced the typologist that Beckett was indeed a Fire type was his medical history. Prior to being sold at age seven, the gelding had a fetlock operation to “clean up” the joint. Despite the surgery, he had never been lame in that fetlock, but it was felt that clean x-rays would facilitate his sale. This is an important piece of the puzzle because all the Fire horse meridians run through the fetlock joint: Heart, Triple Heater, Pericardium, and Small Intestine.

After he was sold, Beckett moved from a high dry climate to a damp warm climate. In that new climate, the gelding developed severe skin reactions to fly bites, which is a definite indicator of the Fire temperament. In addition, the gelding had a second fetlock operation, this time to treat some lameness in that same joint.

With all of these health-based indicators, the typologist could definitely place Beckett firmly in the Fire horse category. With this knowledge the typologist might suggest exercises to help Beckett focus rather than helping him overcome fear. For example, ground exercises to get the horse moving his legs in a specific way and focusing back on the person would help a Fire horse stay focused. The Water horse might benefit from attending a few very small shows and doing no more than hanging out in a safe place like the trailer with another well behaved horse until he got used to the activity. The flower essence, Clear Thinking is designed to help a horse focus and would be great for the Fire horse and the essence, Ego Builder, would be the first choice for the fearful Water horse. The typologist could then also direct Beckett’s new owners to the “Horse Harmony” book and other resources so they could help him be the healthiest happiest dressage horse he could be.

However, as you can see, typing some horses can be difficult because of seemingly contradictory behavior patterns. That’s why one often has to consider the “whole horse”–including behavior, health issues, prior training and handling, diet, and general disposition– before being able to successfully type and train the horse for his intended job.

Puzzled about Your Horse’s Type? Get Help!
If you have tried typing your horse but are more confused than ever, don’t be surprised and don’t worry. As Beckett’s case study demonstrates, some horses are complicated to type because of conflicting data.

Are you puzzled about your horse’s temperament type? Not sure if you are seeing the “whole horse” or the big picture because you simply know the horse too well or love him too much to see him clearly?

If so, get the help of a Certified Level 2 Horse Temperament Typologist. Both Larry Hannon and Kim Bauer are excellent horse typologists and can help you quickly zero in on the important points to type your horse. Sign up for a horse temperament typing consult.

Learn more about our certified typologists.

2 thoughts on “Who Are You? A Horse Temperament Typing Dilemma”