My chicks are 10 days old today and doing very well. When they were 2 days old I had to move them into a nursery so my cat, Owl, could not get at them. I thought it would be a simple deal to put them in my neighbors dog pen and then put some blocks around the bottom so they could not get out. I figured by the time they were big enough to climb over the blocks the chicks would not be able to fit through the bars.

Well that is not the way it worked. I set up the dog pen and carefully lined it with the blocks. I put the chicks in and to my surprise they jumped right up on the blocks and out the holes in the pen. I called for my brother to help me and he came and rounded up chicks while I got some chicken wire inside the dog pen. The wire did not sit flush with the blocks like the pen did so I had to fill in the holes with hay. The hole project took half a day.

Chickens are very messy so I have tried to keep the feeding and watering system as clean as possible. My cousin had a metal chicken watering can and even though it takes up a lot of space, the chicks can’t get in it or knock it over. I finally put their food inside a milk crate so that when they scratched it does not go into the water so bad. For now this setup is working.

I had 2 hens sitting on the eggs but I felt there was only room for 1 in the nursery. I was looking at them all in the nest and noticed all the chicks were under the redder hen and the other one was busy knocking over the food and water dishes. This made my decision easy but the other hen was still not happy to be separated from the chicks. She has stayed right outside the pen for the last week and has not given up on getting back with the chicks. She did get in briefly when I was trying to get the chicken wire lining on and she immediately attacked the redder hen so I am sure glad I did not try to put them all together.

I am sure wanting to raise these chicks up and hope a get hens. I have lost 5 hens already this year so I am keeping everyone in the yard. I had to find a new home for my rooster because he was crowing all day long right outside my brother’s window. Last I heard Big Dog was a pet in the neighborhood of my friend, Ron. Ron took him to find him a new home but his grandson turned him loose. As long as Big Dog behaves himself he will get to hang out. If not he will become soup. I miss Big Dog but, like many roosters, he had become aggressive to anyone who came near the hens. He left his mark, though, because all the chicks look just like him. Madalyn 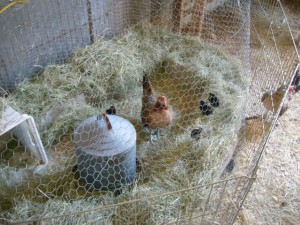 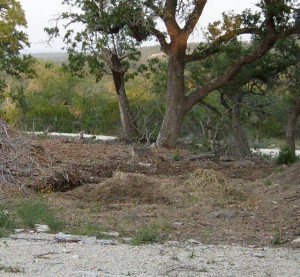 fox that eats my hens