I trimmed Remi’s front feet this morning and I am fairly happy so far with his progress. The cracks at his toes are almost grown off on both feet but I am still having trouble with him growing tough wall. He wears off the wall faster than he grows it and then he starts wearing down his sole. When I trim him all I do is lightly rasp down his heels and round off the walls. 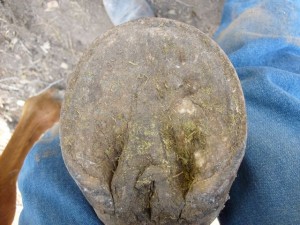 I am trying to leave boots on him half the time so his sole won’t wear off so fast but I am concerned he sweats just enough in the boots to keep his sole soft. I can push on his sole and get a small amount of give but he moves fairly well over the rocks in the pasture.

I took him for a ride in his glove boots a week ago and he moved out better than he ever has before. I have not been able to keep any kind of regular riding program because it is just too darn hot.

I am open to any suggestions of what else to try to get his soles and walls tougher. He gets 1 pack a day of algae, probiotics, and enzymes, ABC Vit E and Selenium, low starch Kool and Kalm feed and grass hay. Thanks to the drought, he does not get any fresh grass. Remi is a Yang Ming Metal/ Earth horse temperament. Madalyn