I have three new chicks starting to come out of the nursery area so this has added fun and stress to my busy holiday season. I never get tired of watching the chickens. Due to sometimes short life spans I have learned not to name them and I try not to interfere too much in their activities.

This group of chicks was born the day before the coldest day of the year so far. One chick disappeared at 2 days old and I have no idea what happened to it. I found no body but I fear it may have gotten too cold and died. The other three chicks spent most of the first few days under the hen. I mixed up some oatmeal, alfalfa leaves, APA algae blend and bacon greasefor them to eat. They would rush out from under mom and eat real fast then get back under her.

This is a young hen that sat on these eggs and she hatched all 4 of them. She is a ferocious defender of her babies but she is really getting tested now that they are jumping out of the raised nest. I watched her yesterday as she jumped back and forth between the chicks on the ground and those still in the nest. Unfortunately, they can jump out but they don’t fly well enough to get back up. I had to brave the attacks of the hen to put them back in the nest for the night.

I watched closely the hen that raised the hen that has the chicks. She has been staying in the henhouse ever since the chicks were born but I have not seen her make any efforts to get to them. Once the chicks came out of the nest, however, she got into action. When the mother hen would leave a chick on the ground unattended this older hen would step in and nudge it to get under her. When mom would come looking the chick would go with her. So I guess the older hen is willing to fill in as grandmother.

I love having new chicks but between checking on them and watching them do funny chick things I am not getting much work done. Madalyn 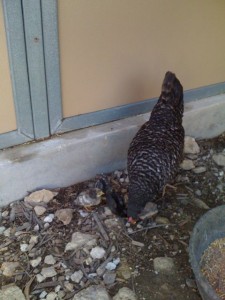