I milked Sally for the first time yesterday and she was not impressed. I am pretty sure Sally is a Fire goat based on her drama queen performance. I knew from her previous owner that she does not like her head handled so I set up a system where I could simply attach her collar to the wall in the corner and she could eat while I milked her and not have her head restrained. 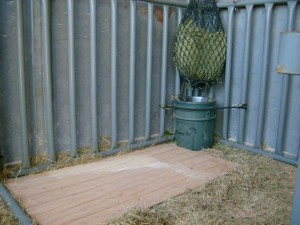 I moved her into the little milking area hooked her to the wall without incident and then started to wash her bag with some warm water. Well you would have thought I was wiping her down with battery acid. She leapt and kicked so I pulled the gate around so she would be confined a bit more. I got her calmed down and started to milk her. She could not get away so she reached around and tried to bite me. This was when I decided she was a Fire goat. The thought that went through my mind was that she was acting just like Cerise when she gets upset.

At no time did Sally try to push on me or really hurt me but she was very clear that what I was doing was unacceptable. When I persisted she laid down. Luckily I was not planning to keep any of this milking because it was quite contaminated by this time. I decided if Sally was going to be this traumatized I would regroup with another plan. I petted her and got her back up on her feet and let her go. Her bag was not that tight so the kids are keeping her milked down enough so that she is not in danger of mastitis.

This afternoon I put Sally in the milking area and hooked her to the wall. I set her up with her feed and alfalfa right in front of her. She immediately started to lean against the wall like she was going to lay down so I petted her and waited until she stood back up and relaxed. Then I sat down next to her and talked to her. Finally, she relaxed and ate her dinner, then I turned her loose. Her bag still does not look real tight so I am hoping a few days of relaxing in the milking area will help her accept the milking. She was milked last year so it is not new to her. If she is indeed a Fire goat it will be important for her to feel like she has a say in things. I sure like her and hope she gets more relaxed as we go forward. The kids are doing great and they have no fear or concern about people. Madalyn

PS Since I am spending time with Sally, Cerise is not coming up to eat or speaking to me!