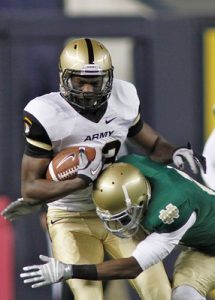 Big dreams come at a high price. God wants us to dream big but he also wants us to grow into the kind of person who can appreciate the victory. It’s the growing between dream and victory that can really challenge us.

I have heard the concept of big dreams requiring bigger struggles but I don’t think I had truly appreciated this until I watched the movie, Rudy. When Rudy came out years ago I remember thinking it looked interesting but never bothered to watch it.

For those who have not seen it I don’t want to give away the whole story. In a nutshell, Rudy is the true story of a young man from a blue collar family and despite being small, non-athletic and a poor student he decides he is going to play on the Notre Dame football team. As you can imagine he catches a lot of flack for such an ambitious dream.

Rudy does not back down, however, and overcomes every obstacle put in front of him. Along the way, even though Rudy somehow makes it on to the Notre Dame practice squad he comes to realize that he does not have the talent to play on the team. Instead of giving up on his dream for himself, he shifts his dream to suiting up for at least one game so his family and friends will get to come watch his game. He wants others to live the experience through him.

The biggest impact Rudy had on me was that he never gave up on his dream. He had to shift it in the end, but he did make it into a game and his family and friends all came to watch. Rudy could have quit so many times and no one would have thought any less of him. Even as he was getting literally battered by the better players in the practice sessions he kept giving his all.

At the very end he almost did quit. As he was right at the point of achieving his dream he almost quit. But he came back one more time when it looked like there was no hope of him making it into a game. No hope for his dream but he came back anyway. And then out of the acceptance of defeat came victory. When Rudy had done all he could and it wasn’t enough, God stepped in. Rudy did his part of having a big dream and being willing to struggle for it, God did his and it was a great victory.

Photo Credit: image by Davyd Brooks, shared on flickr.com with some rights reserved.