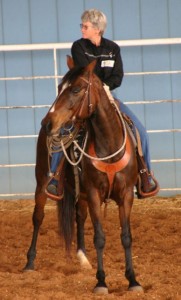 Had an interesting session yesterday with my Fire horse temperament mare, Cerise. Cerise had been working very well over the last few months and her attitude was very good. Up until a few weeks ago I was riding her and then my 71 year old friend was riding her some after we finished our training. Cerise really enjoyed this extra time and attention.

My friend, Rich, had to go out of town but I made sure I spent extra time with Cerise because I knew as a Fire horse temperament she would miss the attention he gave her. Despite my efforts, Cerise’s work effort suffered. She was less willing to round her back and carry herself and because of this her back got sore.

I stopped riding her and did body work and gave her arnica to help her back. Which  brings me to our episode yesterday. As I was working once again on Cerise’s back the goats went by and she threw her head up and threatened to set back on the rope. This was the same spooky behavior that caused her to knock me down this spring and separate several of my ribs.

I would not say I lost my temper but my tolerance level was exceeded. I started working Cerise on the ground and insisted she pay attention to me. I backed her straight and in circles, I asked her to roll her hind end and bring her front end, side pass and go from a back up into a trot quickly. At first Cerise kept the stiffness in her back and dragged her front feet in every movement. After almost falling down several times, she finally released through her back and smoothed out in her movement.

Normally after a horse releases a brace they will relax and lick and chew. Cerise did not do this so I knew she was truly uncomfortable. With Cerise, I always suspect  her digestive system but I have learned to also consider magnesium. Cerise gets daily 15 cc digestive product KLPP , 1 TBS digestive product UF , 4 tablets bluegreen algae with the cell wall removed, 5 grams Mg malate and 1 capsule Eleviv. I know this is a lot but if I take anything away her health suffers.

The only changes had been that I had dropped her Mg from 10 grams to five as the weather conditions were different than last year when I first realized she had a deficiency. Last year we had a rainy spell and the grass was very lush for a few months and all the horses got flighty and weird acting. This behavior totally stopped within a few weeks of adding the Mg.

On reflecting over the last few weeks I realized that Cerise had been a bit more spooky but nothing like last year. I also realized that our 100 plus degree days and 40 mile an hour winds were probably causing her extra stress. I went right to the barn and mixed her up some extra feed with more Mg, KLPP, UF and Eleviv. She licked the tub clean. By the time I had made several trips back to the feed room, Cerise had eaten about 3 oz of KLPP, 3 to 4 oz of UF, 2 Eleviv and 10 grams of Mg. I then rechecked her back and it was not as tight.

Rode Cerise today and she worked very well. She even gave a riding lesson to a friend’s 16 year old daughter. As a Fire horse temperament, Cerise can’t work well when she is in any pain. I know this about her but still occasionally forget. I am glad we have a strong enough relationship for her to forgive me and not hold any hard feelings. Madalyn