I had a fantastic horsemanship lesson with my Fire horse temperament mare, Cerise, yesterday. My trainer, Linda Hoover, was in town and even though the weather was freezing I wanted to ride.

I have been stuck for a while with helping Cerise carry herself in good posture through all gaits and up and down transitions. I would get about 95% but the last step of true collection was alluding us. I knew if anyone could figure out what was missing it would be Linda.

I started riding with Linda about 8 years ago when I was still riding my Jue Yin mule, Tess. Linda comes to town about twice a year and for the first year she worked with me and Tess only doing groundwork. The second year I was sitting on Tess but we worked mostly on posture and bending. Finally I graduated to trotting and we did that for several years.

At that point, Tess was retired and Linda helped me with my Wood mule, Jake. I was back to groundwork and walking as I started Jake under saddle. Jake proved to need a bigger job than I could give him so I found a home for him and bought Cerise. With Cerise I have been able to move forward with refining my horsemanship.

So this is what I was working on yesterday. We started again at the standstill and Linda helped me position Cerise so she had good posture and head carriage before I asked her to step off. Cerise was able to do this well and could even take a few steps before she would drop her back and lift her head. After close observation, Linda determined that Cerise always lost her position when she started to bring her right front foot forward.

We went back to the halt and asked Cerise to step off first with her right front while I supported her correct posture. I could tell Cerise was trying but she obviously did not believe it was possible for her to do this. She would move every other foot and if  I persisted in asking she would reach for her default evasion of running backwards. Being a Fire horse temperament, Cerise 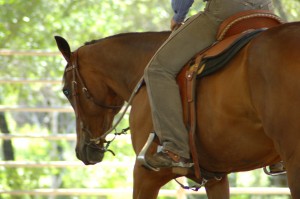 does not do this to be bad but to change the subject when she is frustrated.

Thinking that I might somehow be blocking Cerise we tried the same movement from the ground with no more success. Any try on Cerise’s part was rewarded and she did lots of licking and chewing. Finally Cerise was able to make a tiny forward and out step with her right front and maintain her correct body posture. We quit with this and let her think about it.

I can come back and help her with this now that I know where the problem is. I can totally relate to Cerise because at one point I was so stuck in my hips that could not bend over except from my waist. It took an Alexander trainer to bring this to my attention and someone actually had to put a hand on my hip joint while another person helped me bend from there.

Who knows how these neurological blockages get established but finding them and helping the horse work through them is what refined horsemanship is all about. Linda has established the United States Refined Horsemanship Association for people who want to focus on their horsemanship whether they compete or ride for recreation. More and more versatility type competitions are happening across the country and at these shows horsemanship is part of the judging. This is very exciting to me. Madalyn