Animals have so much to teach us. I have learned from every animal I have met but there are a few who stand out as gifts from God for my education. The first was a Peruvian Paso stallion back in 1989 at my first Linda Tellington Jones horsemanship clinic. This stallion had a neurological condition that in hindsight was probably EPM. I was working with a partner and as my partner did TTEAM work on the stallion’s hind legs I was stroking his chest with the TTEAM wand to help him stay balanced.

At one point I became interested in conversation with you partner and I put the wand against the wall. The stallion reached over and knocked it down. I paid little attention and leaned it back against the wall. He then reached and knocked it down again. This time I picked it up and began stroking his chest. He let out a huge sign and started licking and chewing. A huge light bulb went on in my brain as I realized the stallion had been communicating his needs to me. In all of my experience with animals it had never occurred to me that they actually could interact in this way.

From that moment I have never done anything to an animal without attempting to allow them input into the plan. The longer I am around animals the more I realize the wisdom they possess about what they need and want in life. The stallion reaching for the wand was such a small action but it changed me forever.

The second horse to have a profound effect on my life was a half arab named Leggs. Legg’s had severe cushings disease and was badly foundered. His problems started with insulin resistance but I did not know that at the time. Through all my attempts to help Legg’s I learned so many things that don’t work for this condition. Legg’s patiently accepted all my efforts to help him from hoof trimming to diet. I was not doing any holistic medicine at that time.

Although I eventually did have to put Legg’s down I was able to see the full progression of IR to cushings and laminitis. By knowing where a condition will go without proper intervention I am now able to better evaluate my treatment responses. I am also able to help countless others who are attempting some of the same things I tried and failed with. I can honestly council them about the futility of certain treatments and save their horses suffering. Much of the information in my laminitis, cushings and insulin resistance ebook comes from work with Leggs.

Even with the severity of Legg’s condition it seemed that God protected him from major suffering. He was always bright and ready to eat and be petted. The day he did not come for breakfast was the day I knew his lessons for me were complete and it was time to let him go.

My third greatest teacher had none of the patience and tolerance of the others. Jake, my young mule, was demanding and uncooperative. Despite all my efforts to train him to fit into my plan, he insisted on living his own. After 5 tough years I came to the conclusion that he would never change and this put me on the path to developing the horse harmony 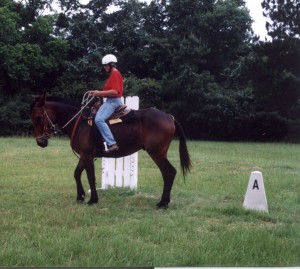 temperament typing system. In fact, our horses are not supposed to change to meet our needs. They can’t change who they are so our job is to help them fit into our world where they will be most happy.

My last teacher is still teaching me. He is Bud, the little food sensitivity gelding I have here at the clinic. I am learning so much about this condition and Bud is a wonderful patient. If this condition can be prevented from ever happening many horses will have much higher quality of life. Watching Bud have good and bad times is helping me understand what triggers his colic episodes.

I am so blessed by all the animals who have come into my life but these 4 are especially memorable. Madalyn